Al Weer Jarig in Nederland - Another Birthday Aboard

It's hard to believe, but Little Man turned 6 over the weekend. All of these birthdays are a big deal at this age, but he really feels like a "big kid" this year - even more so when I realize that he's now celebrated 2 more birthdays abroad than he had in his home country.

Most of Little Man's birthdays, we've celebrated at home with just the three of us or with some good friends - but this year we were luck enough to have his Mormor and Bumpa with us to celebrate. Normally living in the Netherlands means we're too far away for a big family celebration for Little Man's birthday. We even lived too far away in the States (with a birthday so close to Thanksgiving) for him to celebrate with any other family on his actual birthday, so the visit made this year's birthday extra special. 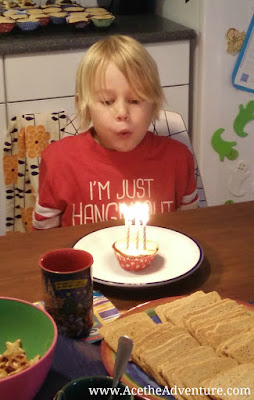 When I think about all 6 of these birthdays, I can't help but reflect on the massive amount of development Little Man's experienced in his time living in the Netherlands. When we came over, he was just a toddler that hadn't yet been exposed to Dutch or a whole lot outside of our little family unit. That started to change about a week after his 3rd birthday when he started at the peuterspeelzaal. Now he's a seasoned veteran of travelling and attending school and is learning to read and write in 2 languages.

I'd like to take some credit for it, but I'm very aware that it's due to his own personality (and probably a good amount of luck) that he's adjusted as well as he has to the crazy learning situations we've arranged for him. I hope that it's made him more flexible and ready for whatever the future will throw at him.
Posted by Ace CB