The Great Earwig Massacre of 2015: A Cottage by Lake Erie

We spent our summer vacation in Ontario, Canada this year. We decided to split our time at a cottage by Lake Erie and at a flat in Toronto to give ourselves a nice combination of country and cosmopolitan.

The first week kept us by Lake Erie. We spent some great time with family, and since the cottage had a private beach right on the lake, the kids had a lot of fun playing in the water or running around the yard. There were huge trees all around, we took the canoe out on the lake and explored around a few bends of the shoreline, we could see turkey vultures gliding on the breeze, we could listen to the gentle sound of waves on the shore in the evening, and the mosquitoes didn't actually seem too attracted to us.

But as it turns out, this damp, cool region is heaven... for earwigs.

Our first run in with the pincer-butt demons of nightmares occurred the morning after having left Little Man's swim trucks on the back of a lawn chair to dry overnight. Mark handed the trunks over and an earwig fell out. Figuring that was the end of it, Mark told Little Man to pop them on. He refused, white faced and saying there were still bugs in there. A quick shake of the trunks knocked 5 more out, and we started to realize how conniving these bugs are.

From that point on, we only came across a single earwig here and there.

Until we left the canoe on the grass.

As it turns out, the metal lip around the top of a Plexiglas canoe is an IDEAL hiding spot for earwigs. Those little buggers had jammed themselves up and into that metal lip, so that when the canoe was tipped right-side up to carry it down to the lake, earwigs started spilling down the sides of the canoe and into the bottom of the canoe, where Little Man would be sitting and our bare feet would be resting.

Now, if you've ever had the misfortune to Google "earwig" you would probably have the same reaction that we did. (Note: If you want to sleep tonight - or this week - DO NOT GOOGLE EARWIGS) For about half an hour, the neighboring cottages could hear the non-rhythmic slapping of flipflops and sneakers on canoe as we tried to kill the flood of earwigs. That in itself was bad enough, but slapping the canoe with shoes caused more earwigs to fall loose.

All told, we killed over 60 earwigs in the canoe. A few others were allowed to escape so they would warn the others to stay away.

And THAT was how we spent our summer vacation.

At least in part.

Do you have a crazy summer vacation story?
Posted by Ace CB 11 comments:

And with that, I can also share a little good news *coughcoughbraggingcoughcouch* ... ahem.

My exam results came in while we were on vacation, and I passed all four sections of the exam! 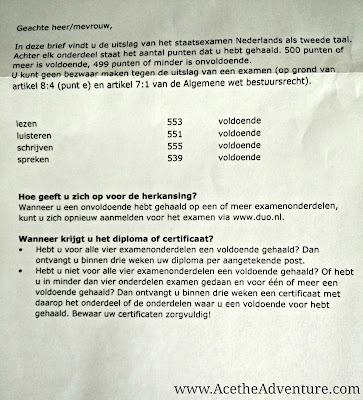 I have no idea what the numbers mean other than "passing" - which is good enough to snag a nifty looking diploma and update my CV with an official "Look, I'm officially not completely helpless in Dutch" status.

While I can be continue to be self deprecating here (it is a favorite hobby of mine, after all), I do have to admit that I am rather proud of myself. It's taken 2 years of hard work to get to this point, and while my Dutch is far from perfect I've come quite a long way. And I give a lot of thanks to Mark (and by extension, the Little Man) for supporting me and making my formal lessons possible, and my friends and colleagues at Bogaers Taleninstituut for teaching and supporting me through the last 2 years.

And thanks to the rest of you who've come along with my so far. I'm not done yet, so let's see how far I can take this thing.
Posted by Ace CB 208 comments: