When we moved to our new neighborhood, Little Man started at a new school. We're very happy with the new school, and already in the last few weeks, we've seen him start to come out of his shell in a totally new way. It's been so positive in the month that school has been in session, it's crazy to think we nearly missed out on this great learning environment. 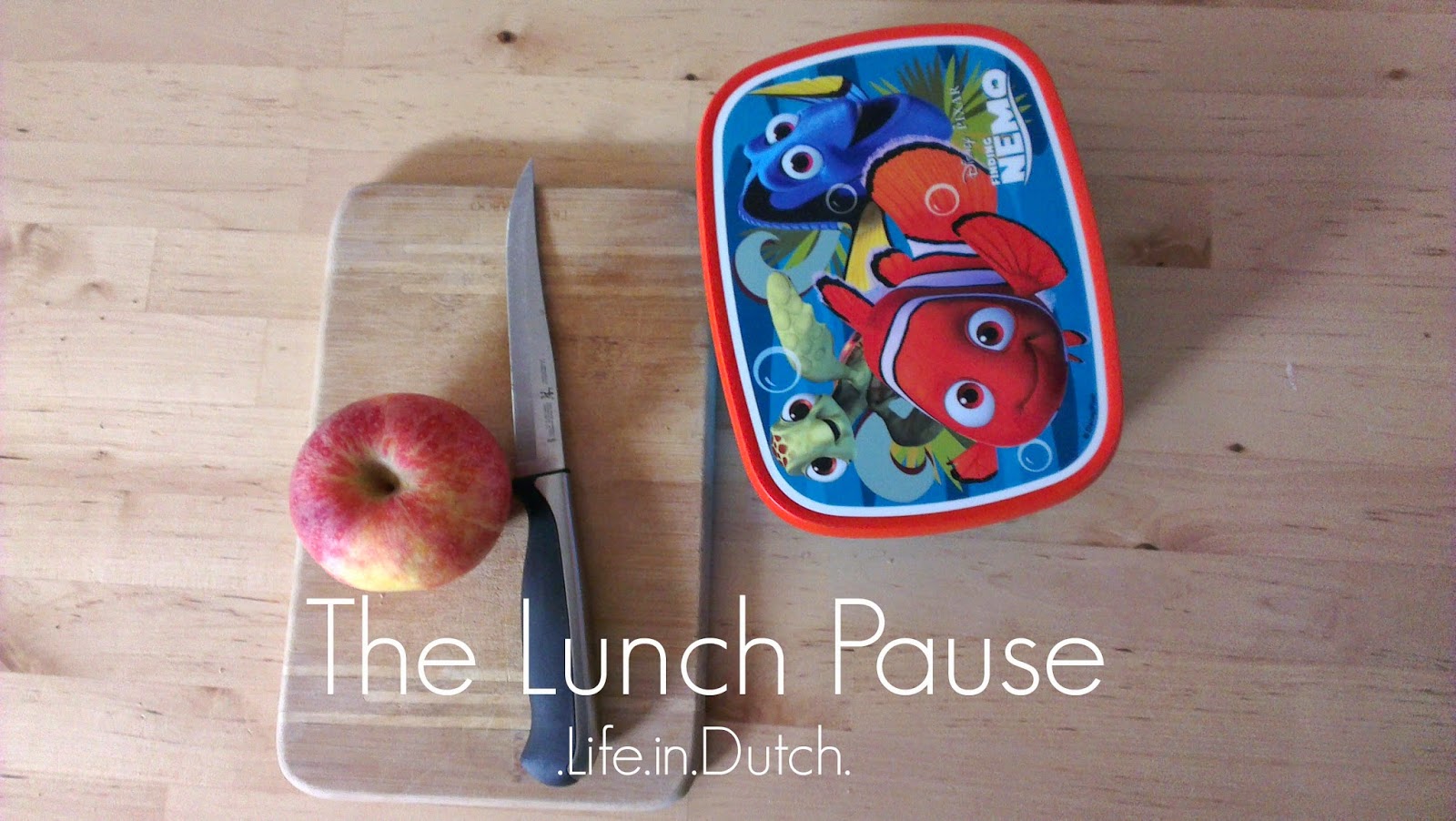 I liked everything about the school from the first visit. The staff and teachers were friendly, the students were happy, the school's population was diverse, the achievement scores were good - everything was looking wonderful. But our final decision was held up by one factor: the lunch pause.

The lunch pause is when the kids eat lunch (obviously), but traditionally, a Dutch basisschool would send all the kids home to eat their lunch. Many schools have opted for in-school lunch time overseen by parent volunteers in recent years, but some schools continue to use the more traditional schedule. At our new school, that makes the day run a bit later than other schools due to the built-in travel and eating time for the kids that head home for lunch. And what about the kids whose parents are working? For a small fee your kids can overblijven (stay over) during the lunch pause under adult supervision. You send them with their own lunch, they'll eat it (or not), and get some extra outside play before heading back to class.

When it came time for us to choose a new school, I hemmed and hawed over the final decision because of the lunch pause. I didn't want to limit my availability for my potential English students or have to pay for overblijven, but I really liked the school and I was afraid that the second choice school wasn't going to be a good fit for Little Man. In the end, we went for what felt a better fit and decided on overblijven two days a week to give me some continuous days to work with. And as it turns out, the days Little Man does lunch pause at home have given us time start getting into chapter books together with the bit of extra time after eating.

It was the best choice for us to make. We were right about the school being a good fit for Little Man, and we're starting to see him develop in such an amazing way in a truly nurturing environment. I'm so glad we didn't miss out on this school just because of my reluctance over the lunch pause.

Have you ever done lunch pause with your kids? Or do you have experience with a "different" school schedule?

The Importance of Baked Goods

One of the perks of moving to a new place was that we needed to buy a stove. At first glance, this looks more like an expense than a perk, but I can guarantee you that this has already been money well spent.

A few times in the past I mentioned my experiences with the devil appliance - the combination convection oven and microwave. For someone that likes to bake things and making casserole-ish type meals, more often than not this meant burns on the outside while underdone on the inside. I figured out a few things that I could make while working around the oven's quirks, but favorite meals and treats were missing.

When we moved into the new place, we had to buy a stove and a refrigerator for ourselves, and now we have a proper oven again. Which means that in a few short weeks I'll need to start rolling myself out of our flat. It hasn't been a month yet, but I've already made 2 large batches of cookies, 3 batches of muffins, and an assortment of dinners in the oven. It's been amazing, and I have no plans on slowing down - I have 2 years of baking to catch up on.

And so in honor of my favorite new appliance, I'm sharing my own take on the famous Chocolate Chip Cookie. Unfortunately, I have no pictures as of yet - they just don't last too long in this house. But trust me, they look and smell great, and it's a version of the classic recipe that I've tweaked over the last few years to what I think tastes best.

In a small bowl, mix flour, baking soda, and salt. Set to the side.

In a large mixing bowl, combine the shortening, butter, brown sugar, and white sugar. Beat thoroughly. Next, add in eggs and vanilla to the sugar mixture. You can do this in a mixer, but I prefer using a wooden spoon.

Place the cookies in the middle of the oven. Bake for 9-10 minutes.

Moving, According to Murphy's Law

Did you miss me? It's been entirely too long, but I'm back! And I can blame the lengthy disappearance entirely on the moving process. We are happily settling into our new home, but getting here was more of an adventure than any of us would have anticipated. The story was supposed to be simple: Get the keys for the new place 14 August, move everything over 16 August, get the old place cleaned up, turn the keys over from the old place 24 August, all while anticipating the usual annoyances of moving yourself in the middle. If the story ended there, this blog post would have been up sooner, and would have ended right here with "and we love the new place. The End." But that story doesn't make for a very interesting post, so fate handed us a more exciting tale (or so I keep telling myself).

When we arrived to pick up the keys on 14 August, we were told that there was a problem with the elevator that started about an hour before we arrived. This happens occasionally, we were told, but it's typically back up and running within an hour. It should be no problem for our scheduled moving day 2 days later, when we were to head up to the 5th floor (that's the 6th floor for the North Americans). The key exchange was normal - and since we brought some cleaning supplies along with us we gave the place a quick once-over before measuring the spaces for refrigerator and stove and heading off to the appliance store.

The next day, Mark carried a few things over to the new place on his bike and arrived to find that the elevator was still broken, with a new note attached to the doors saying that the defect was with a custom piece that needed to be replaced, which would happen when it could happen. We moved our moving truck reservation to 21 August, figuring that surely everything would be fixed a whole week later. In the meantime, some friends lent us their car so we could still start sleeping in the new place as planned, making it feel like home before Little Man was scheduled to start at his new school a little over a week later. At this point in the process, the cats deduced that all of our strange behavior with the boxes over the past few weeks was actually a sign of the End of Times. Thanks to our friends' for the use of their car, we got a surprising amount of stuff over to the new place with a day and a half's work and started forcing our moving plan into a new mold.

Initially, we left most things where they originally stood in the old house waiting for the moving day. But when we remembered that because we had reserved a carpet cleaner for Tuesday, we needed to get everything big and heavy off the carpeted level of the old place to actually clean the carpet. We rode over on our bikes and moved everything down a level. With everything jammed into the living room area, it was impossible to clean the main level, so instead of cleaning the whole house in one day as originally planned, so I started breaking up the work into stages based on accessibility. We made due with the new piecemeal schedule, though it meant more bike trips back and forth between the two homes to make it work.

By the time Wednesday rolled around, the elevator was still broken with signs of the elevator company only beginning to remove the old broken pieces, and they had no idea if the new piece was completed yet or not. We decided that with all the cleaning work we still needed to do in the old place, we couldn't wait any longer - Thursday would have to go on as planned, sans elevator. We steadied our nerves and preemptively popped a few ibuprofen. We're lucky to have some amazing friends - one friend took Little Man for the morning while another helped us with the furniture in the truck and carrying it up. We schlepped most of what we own up all 5 flights of stairs while wondering where all this junk came from and left the heaviest and bulkiest items in our storage unit (that is thankfully only a half a flight down). We even managed to get our beds all put together and coaxed the cats down from the ceiling, and called it good enough for a pizza dinner and beer reward.

On Friday, in full accordance with Murphy's Law, the elevator was fixed and fully operational.

After struggling to decide if I wanted to jump for joy or beat my head against the wall, I decided to use the elevator exclusively for the next month whether I needed it or not.

And that brings us pretty much up to speed. Just retelling the story is making me feel tired again, but we're liking the new place and getting settled in and we're really close to having a normal routine back. So, more to come from me now that the Summer of Insanity has come to an end. It's good to be back.

Posted by Ace CB No comments: