Today is St. Lucia's Day! Traditionally, Saint Lucia's Day (13 December) is celebrated in Scandinavia and Italy. Saint Lucia (also known as St. Lucy) and the reason for her feast day is derived from two different stories. In one, St. Lucia is believed to be one of the Christian martyrs that suffered a particularly gruesome death during a period of persecution by the Romans. In the other story (the one I learned growing up), she was assisting Christians hiding in catacombs during Roman persecution; and in order to carry as many food and supplies as possible, she freed her hands by making a wreath of candles that she wore on her head to light the way.

My mother's family has Scandinavian roots (Danish and Swedish), and we would often celebrate St. Lucia's Day in a small way in tandem with my birthday. We frequently made St. Lucia's buns (little breads - get your mind out of the gutter) to eat on the day; and while we never did a traditional procession, I did own a white gown and wreath of candles (along with Kirsten, the American Girl doll that was a Swedish immigrant) - just in case. To me, these taste like my birthday and taste like home.

This year, I decided to make a batch of St. Lucia's buns. I was a little worried because the convection oven and I haven't yet come to an agreement as to how things should be cooked and because I've only made one or two batches without my mom's help. But they were a success (phew!), so I'm sharing the recipe with you today. Even if you're not celebrating, these delicious treats are worth the time and effort that go into making them. 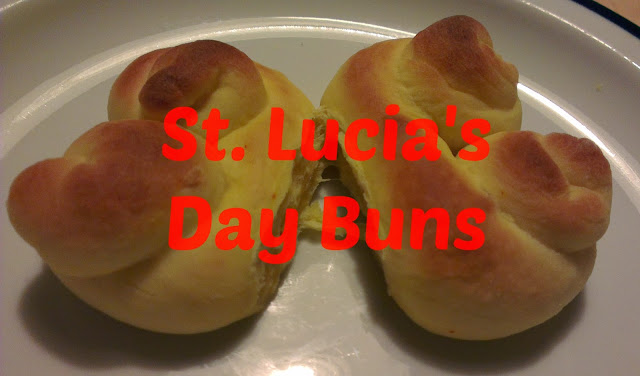 About 90% of this recipe is "preparation" because the bake time is only about 10 minutes. So, be prepared. There's about 20 minutes to prepare the dough, nearly 2 hours of time spent for letting the dough rise, and about 20-30 minutes to form the buns.

In a large mixing bowl, dissolve the yeast in the warm water. I decided to use my electric kettle to get the water just below the boiling point. You will need to stir the yeast often to get it fully dissolved.

Scald the milk on the stove. My understanding of "scald" means just get it to where the milk starts to boil. This has seemed to work so far. Then add the butter to the milk, stirring until it is fully melted. Let the mixture cool until it is lukewarm.


Add 1 Tbs. of your butter milk mix to the sugar/saffron mix and mix through. It will turn a vibrant yellow from the saffron.

Then add the remaining flour (again, adding 1/2 c. at a time) to make the dough stiff and bread-doughy. You will likely need to kneed in the remaining flour as it gets stiffer. (This time around, I ended up adding about 3.75 c. flour total - add to what you feel comfortable for your dough.)

Leave the dough to sit for 15 minutes.

Lightly oil the bottom of a large, clean bowl. Add the dough, and turn over in the oil to evenly coat it. Cover with a tea towel or cheese cloth and leave in a warm place to rise for an hour. After rising, the dough should have doubled in size.

Place your risen dough on a floured surface, and kneed it down. Then divide the dough into 32 even(ish) pieces to make 16 buns. I find that it's best to have the pieces that will be making the same bun even size since the buns will (ideally) be symmetrical.

Make a long "snake" out of each piece, about 7 or 8 inches long. Put two "snakes" parallel to each other, then curl in the ends to make something sort of like a bow.


Put all of your buns on baking paper, and allow to rise for another half an hour so the buns look puffy.

Before baking, brush the tops with the beaten egg. (I forgot to do this, so there's no picture.)

Bake at 450 F/230 C for 10 minutes. The tops should be a golden brown and the dough cooked all the way through.

Enjoy! Traditionally, these buns are served in the morning with coffee - but they go great as a snack with a cup of tea, too. 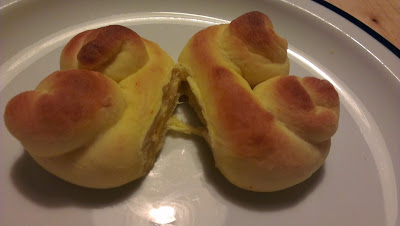