It's Monday again, so I'm joining up with Molly at The Move to America to get the week started and make some plans.

Last week, I'm happy to say brought us mostly back up to speed. The house got cleaned up a bit, the wash got done, and the delicious smells of pumpkin bread filled the house - all sorts of daily chores are actually getting done. I've been trying to keep up on some paperwork around the house, which always feels like a never ending process - especially when it takes longer when it's in Dutch. It's a lot of the everyday type of stuff, but keeping up is important.

Of course, we've continued preparing for Little Man's transition to kleuterschool, which officially starts next week. We've got the additional supplies purchased and stopped off at the library to borrow a book about the first day of school (in Dutch).

I also got these cute, twin dinosaurs finished this weekend and I'm really happy with the way they turned out. Hopefully the little recipients will be as excited about them as I am. If you're interested in trying the pattern yourself, check it out at Free Amigurumi Patterns. This site has a lot of cute, free crochet patterns. I'll be making yet another dinosaur, this time for Little Man; because it's hard to watch your mama make lovey dinosaurs that you're not allowed to play with. A nice blue dino will be in the works shortly, but I'm also planning to move onto making some cute hats.

This week, I started with a nice cup of tea rather than coffee. I go through stages of getting a bit jittery from coffee and as the latest one started I made the switch back to tea for a while. But it goes well in my favorite mug and still contains caffeine, so all is well. 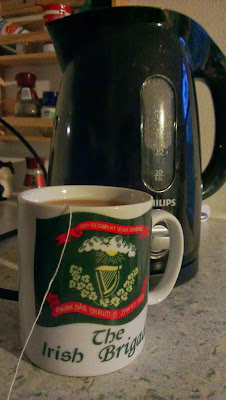 My first goal for the week is something you can help with! I've set a goal of getting the Life in Dutch Facebook page up to 75 likes by the end of the week - but I hope to go further than that! You can help by popping over to the page and taking a look, or using this handy little button right here:

A good portion of my goals for the week involves the camera. For our upcoming trip to Paris, I want to make sure we have a lot of pictures. Sometimes while we travel we forget about the camera and then we don't have as many pictures as I would like by the end of the trip. For a life-long dream trip like this, I want to make sure I'm prepared. This also means getting the camera card cleaned off and the pictures organized on the computer and backed up on another source right away.

Little Man often ends up taking pretty good pictures on his kid-friendly camera, so this also needs to get cleaned off and saved onto a computer so he can click away in Paris. Otherwise, we're getting him excited with the idea of a trip, and thankfully already have the Madeline collection to make the idea of Paris seem a little more real to him.

Well, I'm off to deal with the camera - Here's to your week and plans!
Posted by Ace CB