The Dick Bruna Huis and Nijntje/Miffy

I was looking for something special to do with the Little Man last weekend, and decided to take up a suggestion I received from Alison at A Flamingo in Utrecht to make a visit over to the Dick Bruna Huis, part of the Centraalmuseum in Utrecht and just a short walk from the Domkerk. The Dick Bruna Huis is a celebration and exploration of the artistic work of Utrecht native Dick Bruna, the most famous of which is Nijntje (or Miffy). The museum provides a great combination of activities for kids and adults, and  is a wonderful visual experience.

Before talking about the museum itself, I feel it's worth providing a quick look into Dick Bruna's personal story and his development of Nijntje. Both are fascinating stories which the museum also shares with it's visitors. Bruna was born in 1927 to a very successful publisher who wished his son to follow in the family business. During the Second World War, the Bruna family went into hiding; and to pass the time, Dick Bruna started drawing and painting. As he developed his own style, he was increasingly influenced by Henri Matisse and the idea of using simple lines and bold colors. After the war, Bruna convinced his father he wasn't meant to work in publishing and instead began designing covers for his father's company.

It was while vacationing in 1955 that Bruna developed the story of Nijntje as he was making up bedtime stories for his son about a rabbit they had seen in the vacation home garden. After sketching the rabbit, Nijntje became a reality - the name "Nijntje" coming from the word konijntje (bunny). Since 1955, Bruna has written and illustrated over 30 Nijntje books that have been translated into 40 different languages - though outside of the Netherlands, Nijntje is known as "Miffy." In every story Nijntje is portrayed in a way that children can relate to, and her experiences cover a range of topics that children may encounter.

The Dick Bruna Huis is located in a building across the street from the main Centraalmuseum building, but tickets still must be purchased at the main building. And because I can never shut up about how much I love the Museumkaart, I'd like to point out that admission is free for card holders.

As soon as you walk into the Dick Bruna Huis, you can tell that the space is intended to be playful. A giant Nijntje greets you at the entrance, with little peepholes in the base for visitors to find a surprise (all G-rated, I promise). 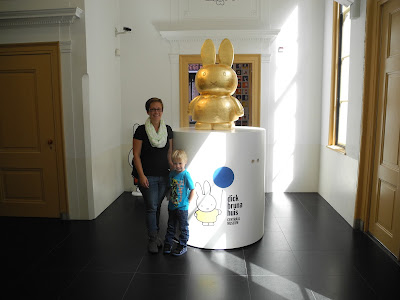 A book room displays Nijntje books all over the walls, and provides listening stations and display books for children to enjoy. 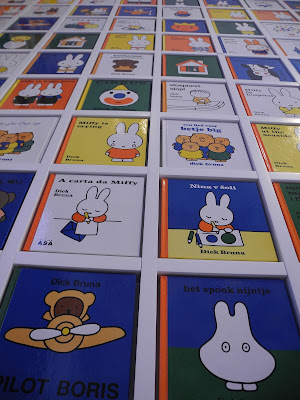 Next to the book room is a room describing the Bruna's life story and the development of his artwork, but Little Man saw the next playroom just beyond, so I can't tell you anything about it other than it exists. If you children have more patience, please check it out. The play room has Nijntje's house, building blocks, computer games, and Nijntje shows playing on little screens. Newly walking toddlers and kids up to about 10 can enjoy the features of the room at the same time.


Above the play room, there is currently an exhibit called "Nijntje in the attic" featuring the work of Roland Sohier, which explores the similarities and differences of cartoon rabbits through modern history. The exhibit is complete with more play areas, and dioramas for a "Where's Nijnte?" game (think a 3D Where's Waldo type of activity).


When visiting the museum during the atelier's opening times, it's worth venturing upstairs to get to put together some giant puzzles and make some Nijntje crafts. If nothing else, take a look at the guest artwork on display - some of the creativity of new "stories" for Nijntje are just as interesting as the originals.


While relatively small in space, it's very easy to spend hours in the Dick Bruna Huis. It's "meant" for children, but adults can appreciate the history of Nijntje and Dick Bruna's love and respect for children. And with that, I'll leave you to consider this message from the creator of Nijntje himself:

"Take children seriously. Be as honest with them as they are with you." - Dick Bruna