Over the weekend, Sara at Chasing the Donkey very kindly nominated me to participate in Capture the Colour, a contest in which your travel photo selections highlight specific colors and are shared via your blog. I'm very happy to have the opportunity to participate and show off some of my favorite pictures. I hope you enjoy them, too.


GREEN:
I'll get this right out of the way: I know I promised pictures of the Netherlands, but I couldn't help but use this picture from the old Glendalough graveyard and 6th century monastic settlement in Country Wicklow, Ireland. When I was thinking about green as I was going through all my pictures, my mind kept returning to this one. It was March, and the only thing with color was the grass, which only increased the starkness of the tombstones and the made ruins feel older. 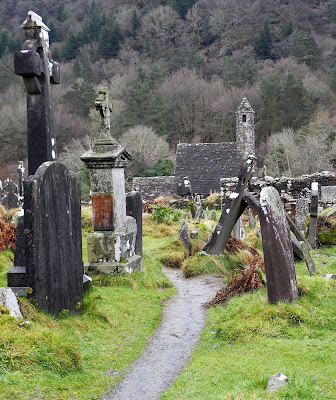 BLUE:
The Dutch city of Delft is known for it's Royal Delft china with the classic blue on white designs. I found this scene, complete with a pre-staged bicycle, while walking through an alley as a shortcut. You may recognize it from one of my Wordless Wednesday posts. I like this picture so much that I had to share it again. 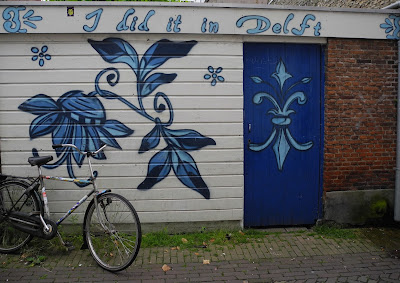 RED:
This was taken inside the tower of the Nieuwekerk in Delft. Little Man made the climb up the 376 steps of the 85 meter tall tower without help. I like the red hoodie and the red of the brick surrounded by shadows. I think it's a good example of his curiosity and his excitement for exploration, as he looks out the window partway up the tower, overlooking the church. 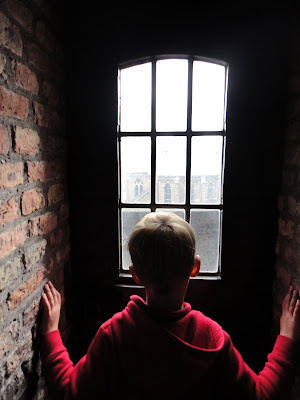 YELLOW:
One of the most visually stimulating places in Rotterdam are the Kubuswoningen (Cube Houses). Rotterdam is well known for it's interesting architecture, and the Kubuswoningen do not disappoint. All are painted a bright yellow which give a better perspective on the shape and depth of the homes. 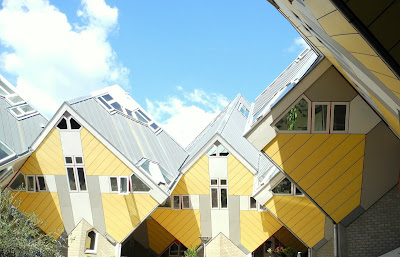 WHITE:
Okay, I confess: This picture was also taken outside of the Netherlands. This quaint, white windmill is set along a bike path between Brugges and Damme, Belgium. Again, it was so picturesque, I couldn't help but use this photo. Look at that beautiful landscape! And the big, puffy clouds! Complete with the sheep dotting the field and the crow on the fence post, this photo was begging to be included here. 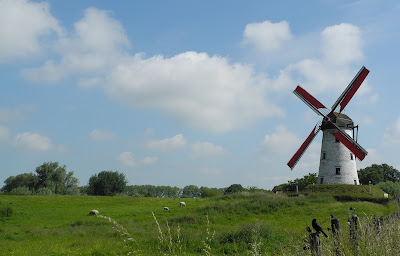 And now it's time to nominate some other nice folks and ask them to share their photos. Please check out their blogs, they have some wonderful posts, and they include great pictures!

Once you've been tagged, you can share your photos based on the rules of the Capture the Colour Contest and then nominate 5 other bloggers to do the same. Don't forget to tweet #CTC13 to @travelsupermkt with your blog's URL to complete your entry.

From Casinos to Castles:
Deanna is an American expat from Las Vegas who relocated to Germany with her German husband. She writes about her experiences in an honest way that is so endearing and heartwarming, you can't help but like it.

The Move to America:
Molly is a Brit currently in the process of moving to America to join her husband. She's shared her tips for the whole moving process, including navigating the US visa system and finding a good way to ship your things when you're not moving a whole house. And she hosts the great Monday Coffee Morning link up to reflect on the past week and make plans for the week to come.

Expat Tales from Stockholm:
Jamie is an American expat that recently relocated to Sweden with her husband. She shares information about the expat experience with a sense of humor; and posts wonderful detail about her explorations of Sweden and beyond.

Beginnings in Bayern:
Shannon is a newlywed American expat in Germany, but she's had lots of experience living and traveling abroad. Her blog has great stories about traveling and things to do in Germany; as well as some very insightful posts about what it feels like to be an expat.

A Flamingo in Utrecht:
Alison is an American expat living the Netherlands and keeps a blog sharing events, history, architecture, and beautiful finds from around the city of Utrecht. She shares some wonderful stories about the places around the city that many English speakers wouldn't necessarily know or find on their own.

I'd also like to include a little information about Sara at Chasing the Donkey, so you can know a bit about the person that provided me with the opportunity to participate in Capture the Colour. Sara and her husband are Australian expats in Croatia. They're currently perfecting an old home they inherited in the gorgeous Dalmatian landscape while she learns Croatian and they embrace the way of life in their new home. She has lots of helpful information for other expats in Croatia and has a sense of humor through everything. Her blog is a great read, I really recommend checking it out!
Posted by Ace CB