We mentioned in last week's IKEA Vrijdag review of the Hemnes Bijtafel/Sofa Table that IKEA recommended particular baskets and we disagreed...

We purchased the Nasum Mand/Basket for our Hemnes Bijtafel/Sofa Table instead. The Nasum fits just as well into the space as the recommended baskets on the IKEA website, and we felt that the lighter coloring of the banana fibers that make up the weaving matched better to our Nordon Klaptafel/Gateleg Table that we use as our kitchen table.


The thicker weave of the banana fiber "hides" the numerous weirdo kitchen items that have been mostly dumped pell-mell into the baskets, but is also easy to pull in and out since the weave is smooth and not "bumpy" like a traditional wicker basket (the baskets were designed with the Expedit series in mind, but I think that since we're always going in and out of the baskets, these are a good choice for the Hemnes).


The assembly was easy: the baskets came flat and opened up into a box shape, and the bottom piece just drops right in, keeping the sides steady and keeping the stuff from dropping out when you pull the basket out. It's like IKEA thought of everything... The only issue with the baskets is that some feel sturdier than others - one of the bottoms in particular seems just a touch too small for the rest of the basket, but we've been able to keep lighter things in that one, though I feel like there should be a little more consistency for something mass produced like this. Since the Little Man doesn't feel the need to rummage through these baskets, they've stayed pretty clean - which is good, because I don't have a clue as to how I'd clean them after a child-related accident... 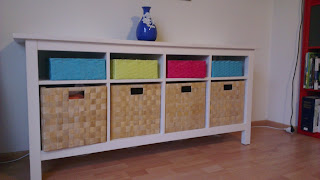 We give the Nasum Mand/Baskets 3.5 Swedish meatballs on our 5 meatball scale. Points are deducted for the seemingly random level of sturdiness to each basket.