We're upon the last day of Carnaval, or Fat Tuesday as it's known to most American Roman Catholic and "the day before Ash Wednesday/Lent" for most American Protestants. For Americans, Carnaval is best equated with Mardi Gras as celebrated in New Orleans, but here in the south of the Netherlands it is much more than just the Tuesday before Lent.

First, only the southern part of the country, which is traditionally the Roman Catholic part of the country, celebrates Carnaval - the predominantly Protestant north did away with such "superstitious" activities after the Reformation, and many Dutch from the north still think of Carnaval as a "stupid" or "silly" quasi-holiday recognized by southerners. We're in Noord-Brabant province, bordering with Belgium, and we've been celebrating Carnaval since last Friday. Technically, it doesn't start until the Saturday before Lent, but most people start celebrating on Friday. If nothing else it gives the kids a chance to celebrate at school since the schools are all closed during the week of Ash Wednesday.

Traditionally, the usually reserved Dutch "let it all hang out" during Carnaval. People dress up in all manner of costumes - the dedication of which is amazing when some people refuse to wear coats over their costumes when the temperature is hovering around freezing (0 degrees C). On Friday, the Little Man had a costume party at school and the kids got to dance and play and get ready for Carnaval. At pick-up time, the parents were allowed in early to watch the kids run around to "oompah" music and play with confetti and streamers.


The grown-ups, in the meantime, are also dressed in elaborate costumes and are mostly drinking their way through Friday, Saturday, and Sunday. Sunday is the height of the celebrations with parades complete with everyone in costume, crazy looking floats, and more drinking. The traditions in each southern region differ slightly - some places everyone dresses up and rich and poor alike are on equal footing for the celebration, in other places it's an opportunity for the masses to mock and parody the rich and powerful. But for the most part, it's a chance to act goofy for a few days and no one will think any less of you for it.

We attended the parade in Tilburg city-centre on Sunday, much to the delight of Little Man, who spent the majority of his time collecting streamers and making a huge pile of them at our feet. 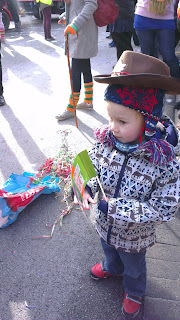 At least in Tilburg, green and orange are the official colors of Carnaval. It's not entirely clear why these are the two colors, but it seems to stem from some medieval understanding of the virtues and evils associated with the colors.

We saw some weird costumes and floats, heard lots of "oompah" music and enjoyed the frivolity. At least next year we'll be prepared for our own costumes and really get into the celebrations.
Posted by Ace CB