So last night the nuk went into the shoe and the shoe was left in front of our fireplace. While the first official night without the nuk wasn't the most peaceful we've ever experienced, the Little Man was very happy to find Sinterklaas had been to his house. 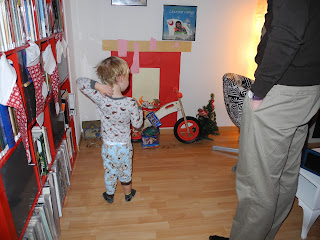 Poppa woke the Little Man up this morning to say that he thought he heard paard (horse) hooves on the roof last night, and the Little Man very firmly told Poppa that he had seen several paarden (horses) in the garden last night and that they all belong to Sinterklaas. Upon coming down the stairs, Little Man was very happy to find a brand new loopfiets (balance bike - a two wheeler without peddles), a Little People Sinterklaas play set with the paard van Sinterklaas (Sinterklaas's horse), a chocolate letter for Little Man's name (a very common sweet given from Sinterklaas), and lots of kruidnooten (small spice cookies).


The paard van Sinterklaas was quickly introduced to the donkey from the Little People nativity set, and the two "paarden" were made into fast friends; and the loopfiets is a work in coordination, but we think it will be mastered soon. And chocolate and kruidnooten were consumed for breakfast. All in all, Little Man was pretty happy with the gifts Sinterklaas, and the rest of us hope the transition to nights without the nuk will go more smoothly - starting tonight.