...Well, maybe it is to the Dutch... but for this American family living in Holland, our transition to our new country of residence has been eased in major ways by the bureaucrats we have come in contact with (not to mention our relocation company, but there are some things even outside of their helpful hands). In particular, we've had brilliant luck getting the Little Man enrolled in school, which involved two separate entities.

Firstly, the Peuterspeelzaal. The Peuterspeelzaal (PSZ) is essentially a government-supported universal part-time preschool (more akin to a "mom's morning out" type of program in the States) and the parents' contribution for tuition is based on the family income. Children ages 2 to 4 typically attend 2 or 3 hour sessions twice a week to encourage socialization, have some additional early-childhood education, and give primary care givers a brief repose from the little darlings. We have successfully enrolled Little Man at our local PSZ so he could have consistent play time with other children and to start his immersion in the Dutch language. We started looking at the PSZ at the end of October and despite the pending space availability, he officially started in his class last Friday. When we first spoke with the PSZ representatives and explained our recent arrival, they were eager to have him enrolled as soon as possible so he has a handle on the Dutch language before starting basisschool (primary school) at age 4. The staff really seemed to go out of their way to ensure Little Man was going to get what he needed, and as quickly as possible. 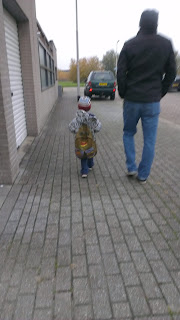 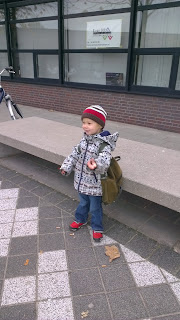 Children's general medical care in the Netherlands is taken care of at the Consultatiebureau (CB). All children under 19 years old visit the CB for all vaccinations and "milestone" checkups - and the CB works closely with the PSZs to ensure that children are thriving and getting any educational services that they require. Within an hour and a half of speaking with the PSZ people the first time, I received a call from our local CB office regarding his enrollment. Because Little Man is not a native Dutch speaker the PSZ contacted the CB to have them do a face-to-face meeting to evaluate his understanding of Dutch. Upon confirming that we indeed, do not speak enough Dutch to make it through school, the CB wrote up an official letter recommending Little Man attend PSZ four days a week in order to speed his language acquisition. The CB office then set us up for Little Man's 3 year checkup and vaccines and walked us to the PSZ office to deliver the letter.

I'm sure there are horror stories for some working with one agency or another, but so far we've had no complaints. We've had our needs met with speed, accuracy, and professionalism - and it's deeply appreciated.
Posted by Ace CB