Really, the excuse for no posts in the last couple weeks stems from too many (small) things going on at one time - and while Mama naturally has a tendency to be everywhere and nowhere at once, hanging out with a not-quite-three-year-old has apparently been rubbing off in the attention span department.

Besides a day trip to Breda a few weeks ago (look toward the end of this entry for more), we've mostly been involved in day to day things that are important in themselves but because they are rather commonplace can distract me a little easier from the voice that says, "Go write on the blog."

In no particular order, here's what we've been doing during our e-silence.

Little Man has a certain fascination with acorns (among other things), so we decided to make use of it. I can vaguely remember an art project in my own kindergarten days that involved shaking the begeezes out of paint, marbles and paper in a box to yield an interesting paint job. Rather than go out and spend money on pretty little choking hazards like marbles, I decided that we could collect acorns in our neighborhood and have a little science lesson about trees before we used the acorns for art. Eco-friendly and educational! What could be better? Here are the steps of our project which gave us 4 paintings before our attention drifted to sticks in the yard...

Little Man's birthday gift to Poppa was fun to make; just some mini-canvases, layered acrylic paint, and painters' tape. Little Man picked the colors, helped with the tape, and did a good amount of the painting. They are now displayed in Poppa's office. 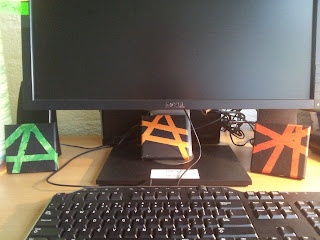 I'm still getting used to baking/cooking with a convection oven - particularly with one that doesn't have a rack that stays level once anything is placed on it and only selects the temperature (in Celsius) in 10 degree increments. I can convert the temperature well enough and experiment with the cooking times, which leads to a different result each time. Interestingly enough, the banana bread that tended to stay a little gooey in the middle while the edges burned when cooking in Chicago is now coming out perfectly in Tilburg.

Finding certain ingredients for baking is challenging: i.e. baking soda. Baking soda is just not used in Dutch cooking except as an aid for stomach aches resulting from said cooking. Luckily, the Chinese and Indonesian groceries will carry it for the British and American expats. The other challenging food item that I still haven't come across is cocoa powder. I stumbled upon a rather delicious homemade brownie recipe last winter that I'm itching to do again now that it's getting cooler. But alas, in the land that developed the style of Dutch-processed cocoa, I cannot find any. It feels a bit like the only phrase anyone remembers from Samuel Taylor Coleridge's The Rime of the Ancient Mariner, "Water, water, every where, nor any drop to drink."

Poppa started a beginner's Dutch language course at the university with other recently-immigrated faculty in his department. At two weeks in it's going pretty well considering no one had any real base to the language outside of Google-Translate; but it feels a bit silly with textbook conversations that follow like so:

Stop and think for a moment: have you ever asked someone for their postal code/zip code within the first two minutes of meeting them in a social context? Probably not... Not to say that it isn't important to know your postal code or how to respond to someone asking... but, you know...

Since the university course times weren't very convenient, I am looking into an outside program for language courses. Little Man and I have been picking the language up from children's shows, but I'm finding that draken and heksen (dragons and witches) from the sprookjes (fairy tales) don't typically come up in normal conversation. In the meantime, I'm going through Poppa's textbook and CD and working through the lessons.

A good way to keep connected to the States has been with the podcasts from some of our favorite NPR based shows like This American Life, Radiolab, and Freakonomics Radio. The shows themselves are weekly, but they archive each show and provide it for download or web streaming, which is fantastic.

I've recently taken back up and re-teaching myself how to crochet. I'm working on a large project right now, but while picking out yarn for it, Little Man wanted to take home a totally different skein. I offered to make him a hat out of the yarn , which he liked, so I took a couple days to make him a hat and a scarf. First, while getting back into the swing of crocheting, it took a few attempts before making a hat the right side. Notice the hats even too small for the cats...


But finally, I made a hat big enough (too big actually, but better than the other options for his part-Irish noggin) and a scarf to match, and we have one happy little boy. Other projects are still under construction. 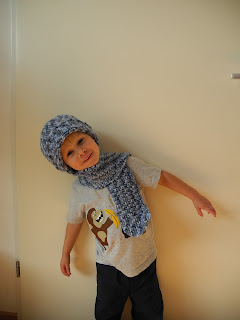 A few, we made a day trip to the city of Breda. It was a trip partly for pleasure and partly so we could buy the last of our furniture at the IKEA (no, seriously, this really is the last of the furniture...).

Breda is the next major city to the west of Tilburg, just a 10-15 minute ride on the train. Unlike Tilburg, which came to into being when several villages grew into each other and eventually became one entity, Breda is a very old city that even boasts a castle. We made our way around town using a self-guided walking tour booklet (€2,50 for the English version in the Breda visitors' center).

At least since the 1400's, Breda has been held and controlled by a Lord. I'll confess that I have only a vague understanding of European history pre-World War I, and I'm certainly not an authority on Breda's history, so here goes a brief synopsis of Breda's history.

The city/castle bounced back and forth under the control of the Dutch and the Spanish. The castle was altered several times over the years as each group sought to improve it, but the biggest change came in the 1800's when the Dutch military took over the castle as a training center, closed the castle to the public, and even added another level to the castle. To this day, you can only view the castle from the outside.

Breda is also home to the oldest begijnhof in the Netherlands (the other begijnhof is in Amsterdam). A begijnhof is essentially a closed community of women who take vows of chastity and obedience, like a Catholic convent for laywomen. The women could join or leave the community at any time, but it was a good place for pious single women to live peacefully without worry about marriage, remarriage, etc. The Breda begijnhof was officially established in 1267 (at a different site), but likely the begijns were living in the city before official recognition by the lord in 1267. Today, homes in the begijnhof are private residences (the last begijn passed away in 1990), but the courtyard, chapel, and Breda Begijnhof Museum are still open to the public.

There are two great art museums in Breda. The Breda Museum which has various artwork and historical artifacts on display. We went through and enjoyed the history exhibit and the photographs on display. The MOTI (Museum of the Image) in Breda (we didn't make it into the museum this visit) is the only museum completely dedicated to graphic design. It's renowned for its exhibits, and holds a piece of history - it's located in one of the oldest buildings in Breda, dating back to the 11th century. We're looking to make a visit on a future trip.

The self-guided walking tour we used was helpful because it got us around the to "major" sites in the city and to some buildings and monuments that we didn't come across during our pre-trip internet research. It was especially helpful because many of Breda's streets were built over or followed old moats ringing around the city, making the streets as confusing as possible if trying to blindly follow your way around. But all in all, it was a trip well spent. As ever, here are our Breda pictures for your enjoyment.


*No cats were harmed during the writing of this post. However, their dignity suffered a little.
Posted by Ace CB