Baking Out of a Box in Dutch (Kind of)

Like any good business, our local Albert Heijn grocery store does an excellent job of putting things to catch a toddler's attention at toddler level. That is how we were led to one of our first experiences baking out of a box with Dutch directions.

A little back story to our baking story: Now that we have our televisie and cable set up, the Little Man very happily watches morning cartoons. We purposely choose shows recprded/dubbed in Dutch figuring he'll pick up some of the language by watching. His new favorite show, Sprookjesboom (The Fairy Tree), takes characters from several popular sprookjes (fairytales) and tells versions of the tales based on the characters' interactions in their village and the sprookjesboom narrates the tales. This is the first kids' show we have purposely recorded on the DVR.

Like any good show for kids, there is merchandise to ensure your child's continued interest in the show. While wandering down the aisle in the Albert Heijn with the baking products, Little Man found several boxes of Sprookjesboom themed baking snacks conveniently located at his eye level. Since we've been driving "May I..." into his head anytime he asks for something, Little Man quickly determined that he should put on a very sweet voice and puppy eyes while asking, "May I have Sprookjesboom?" I cave, and we pick out a box with paddestoelen cakjes (toadstool cupcakes) and a box with character koekjes (cookies).

Friday morning, we made the cakjes. I decided to go without Google Translate while "following" the directions on the back of the box. I know roomboter (butter), eieren (eggs), and water (I'll let you guess) - all the additional ingredients - and I know how to set the convection oven. Easy enough.

One thing to know about the European cooking: Just about everything is done by weight rather than volume measurement. Our recipe called for 50 grams of roomboter, but I hadn't yet bought a cooking scale. Our boter block came in 250 grams, so I figured I would just eyeball 1/5 of the block - not exactly a scientific solution but for box cakjes made by a Little Man it's good enough. Everything mixes together and the batter looks like it should. 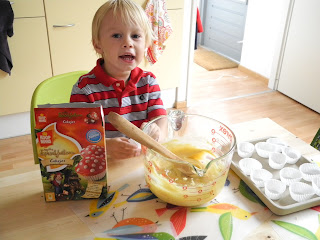 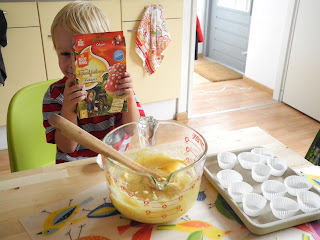 One issue that I've run into before is that we have a convection oven - it forces hot air in by fan so there is no preheating. On the box, there is a separate temperature listing for elektrische oven (electric oven), heteluchtoven (convection oven), and gasoven (gas oven). Most homes in Holland either have a heteluchtoven which is generally a little smaller and can be installed in with the cabinets or can sit separately and also functions as a microwave. Homes with what I would call a "proper" oven will usually have an elecktrische oven, though some will use gas. The couple of times I've used the heteluchtoven, things don't cook through. If you take a look here, behind Little Man adding water to the glazuur (icing) mix, you can see that the cakjes have sunk in the middle. Only the one that was sitting closest to two vents, the bottom right corner of the pan, actually cooked through and rose all the way. I think that from now on, we default to the elektrische oven settings. 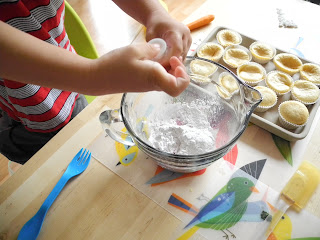 Adding the glazuur and the dots to complete our paddestoelen was easy enough. 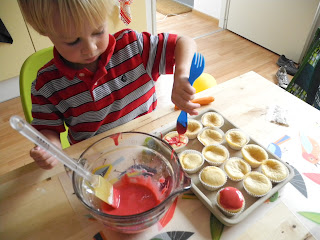 See if you can find the paddestoel Little Man decorated exclusively. Really, only a couple of these - mainly the only one that rose properly in the oven - kind of resemble paddestoelen. I'd also like to point out that for an area of the world that operates using the metric system to the point that even the eggs are sold in cartons of 10... the box makes a baker's dozen... purposely... I can't figure out why. 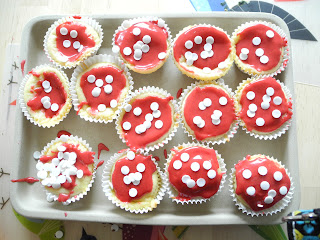 But despite our trials and confusion, we enjoyed our hard work. 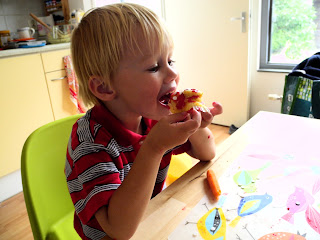