When we live in one place (or one country) it's easy to hold certain ideas about what it means to live in that country. Many of these assumptions are based on being able to speak the official/common language of a land/region. As expats/refugees/immigrants/etc. try to make their way in a new country they face many challenges that revolve around language; and they're sometimes met with scorn, condescension, discrimination, or pity. When you're the native in the land it's easy not to think about what language means for that person or what's really happening in order for them to communicate in a different language.

While it's pretty easy to come to the Netherlands as a native English speaker with so many Dutch people speaking excellent English, it doesn't mean we've been entirely isolated from language-related challenges. I always knew that learning a language isn't a simple process but I never fully understood just how difficult it can be until moving here and trying to learn Dutch. There are situations and ideas that you never face in high school or college language classes because it's not just a matter of "getting by" or "passing the test." I have heaps of respect for people that don't have the advantage of living in a country where so many natives speak their own language and are making their way on a more difficult path. After thinking about this idea of language for some time, here is my list of 5 things you don't understand about language learning until you're a foreigner. 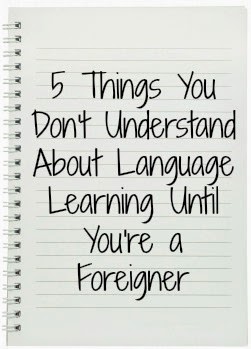 1. When You Start Learning, You Start from the Beginning

You are literally starting over when you learn a new language. I know this is an obvious statement, but when you're already fluent and capable of every type expression in one language, it's sometimes frustrating to find that you don't have the words for commonly used nouns, verbs, and adjectives for basic communication. Every word is new, and needs to find a new place in your brain to remain and be easily recalled. You may have a few lucky moments when the words are the same or very similar between your native and learned language, but mostly you're starting from scratch. And that's daunting when you really stop and thing about it.


2. It's Not Just Vocabulary

"Word for word translation" rarely works. Some words have no equivalents across languages. The word order of a sentence is different between languages. Sometimes you have a bad translation. Sometimes your translation is correct, but there is some nuance that isn't explained in a translation. And everything carries a cultural context, whether it's immediately evident or not. You don't just "learn" a language, you have to "experience" a language - and that doesn't happen in just a few weeks.

When you want to express an idea, you constantly search for the right words. When you do have the word, you have to seriously think about how to put those words in the correct order and account for all grammatical rules. When someone is speaking to you or you read something, you find yourself first defining each word and then constructing the meaning based on the word combinations and word order. I often find that writing a 2 sentence e-mail in Dutch takes me 3-5 times longer than it would in English. It takes a while for some things to become automatic, and even then it's easy to slip up if you're stressed, tired, sick, etc.

Two weeks ago, I had to call 112 (emergency services). While cycling along a busy bike path with Little Man, I noticed a mobility scooter overturned in a ditch with an elderly man still in it. I didn't see him go down and I have no idea how long he was there, but I was the first person to stop. I'm glad the woman behind me also saw him at the same time. She went to him while I started the call.

When we're emotionally strained (whether it be nervousness, anger, or even happiness), our brains default to our first language. This started happening to me on the phone with emergency services. I was sputtering through the basics of the beginning of the call before I thrust my phone at another person that stopped to help and stuttered out, "Ik spreek Engels. I kan niet," ("I speak English. I can't") as I pointed at the phone. She took the phone and explained the situation to the dispatcher and gave directions for the ambulance. The ambulance and police came and helped the elderly man, who seemed to be doing pretty well considering what happened.

In the back of my head, I fear a real emergency because of my language skills. Again, we're lucky that someone will more than likely speak excellent English, but I don't like relying on that, just in case I really do need to power through and work harder than normal to keep my brain on track.

If you can't understand or respond to basic questions, you feel stupid. That's feeling deepens when you can tell someone is making a snide comment but you can't quite understand what they're saying or make a retort. When you keep struggling to make certain sounds that don't come naturally to you and people look at you with confusion. Or you just finish saying something and the person starts speaking loudly back to you, as if the volume of the conversation was the issue. Sometimes the feeling of stupidity stems from your own embarrassment of not having as good an understanding of the language you're trying to learn. Sometimes it stems from the unintentional or intentional reactions of others.


I bring up all these points today because it's easy to feel smug about our native language proficiency and make assumptions about non-native speakers. Even the most well-meaning person can find themselves forgetting how challenging it is to learn a new language. As the globe continues to become ever more interconnected, we need to keep in mind that picking up another language isn't easy and a variety of factors go into whether or not someone is or feels successful picking up a new language. Now that I'm actually doing it myself, I'm even more aware of these feelings, and hope that my previous moments judging non-native speakers were few and mild.

On a similar note, Amanda at Expat Life with a Double Buggy recently did an excellent post about constantly communicating in a different language other than your native tongue. It's well worth the read.

Have you tried learning a new language or lived as a foreign speaker? Were there things about language learning you didn't really appreciate until living in a different country?