Cycling in NL: Yes, This is Normal Here

The Netherlands are well known for the use of bicycles, but I think that until you really see it and experience it, you have no idea just how big it is in Dutch culture. Bikes can and will be used for just about everything, and you would either get a lot of strange looks or possibly have someone call the police if you tried the same things in the US. But after spending some time in NL, you really just take anything bike-related as part of daily life, and it's something that we've been happy to embrace during our time here.

To start, bikes are everywhere. Literally. In a country with a population of roughly 16 million people, there are approximately 18 million bicycles. Bikes are used for recreation, but they are also a main mode of transportation. Kids bike to school or to a friend's house. Adults bike to the grocery store or work. Many times it's more convenient than going by car.

In the US, people are often hesitant to ride around with their kids on a bike, but the Dutch don't even blink at it. While it is something you'll even see in the US, the Dutch participate on a much grander scale no matter if they're in cities, suburbs, or villages. As we don't have a car, to get a lot of places we're strapping the Little Man into his seat and heading off.

If your child is too big for a bike seat but doesn't have a bicycle or you're just making a short trip, there are options to ride along anyway. Many people have their kid hop onto the rear rack and hold on, or you can purchase a special bar to give some support and help prevent your kid from falling off the back. The fancier ones will even come with a padded seat. 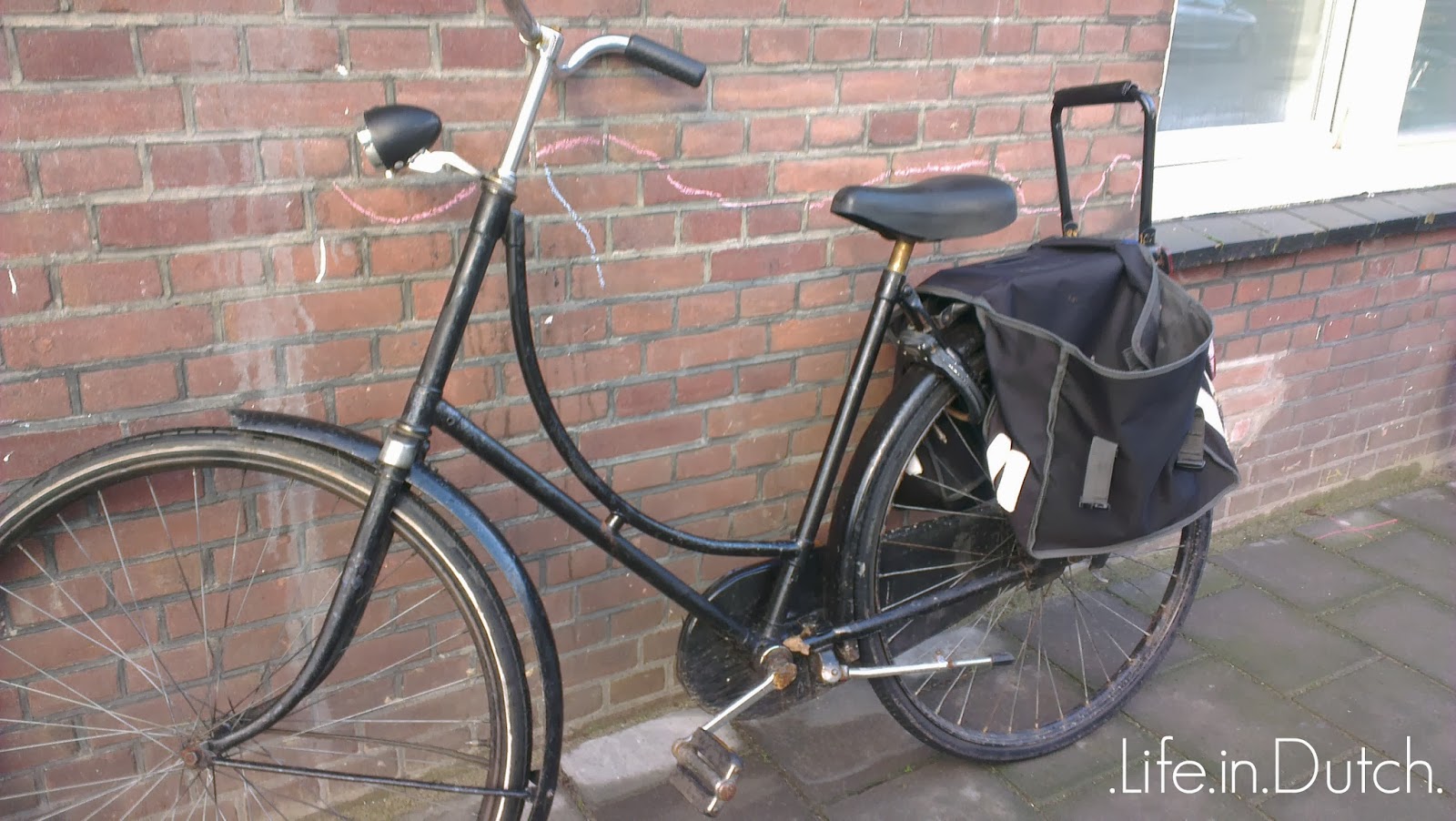 Having two kids is easy, too. It's very common to see parents (or even grandparents) cycling around with two kids on one bike. There are specific moederfietsen (mothers' bicycles) that you can purchase with two seats already attached, or you can purchase seats separately and install them yourself. Sure, you could get a bike trailer (and some do), but that takes up space and gets pretty heavy - two seats attached to your bike is a lot easier to manage. The first time I saw two seats on a bike was in Chicago, and I was impressed. They are so common in NL that it doesn't even register in my brain most of the time now, even when I see someone talking on their cell phone and smoking a cigarette while riding with two kids and all their groceries. True story.

Now, if you're thinking, "Surely they stop at two kids," you're way off. The bakfiets (cargo bike) is a good option when carrying several kids. And there are several options available. My good friend Farrah has a cargo for her boys that hauls from the back, but there are also options where the load sits in front of the cyclist. Depending on your brand of bakfiets, you can fit up to 5 kids. I once saw a woman riding with 4 kids in the cargo box and one kid behind her on a mounted bike seat, which is real dedication in my opinion. And if you're thinking that rain may hinder these amazing feats of balance, you're wrong again - You can even purchase rain covers to keep the kiddos dry when biking in the rain - because there's no reason to drive just because it's raining.


The different bakfiets  may also be used for regular deliveries by shops or by people that regularly find themselves hauling large and heavy stuff.


Biking with a baby isn't a problem, either. If you already own a bakfiets, often the baby's car seat can be strapped into the cargo area and off you go. But if you don't own a bakfiets, the babymee is often the next option. The babymee is a special basket/contraption that is mounted onto a parent's bike and then holds specific brands of infant car seats. This crazy thing really threw me the first time I saw it because I'm pretty sure someone would call the police for child endangerment in the US. Different manufacturers recommend waiting until the child is somewhere between 2 and 4 months old - whereas in the US the general recommendation is waiting til the child is 12 months old and has a neck strong enough to hold up a helmet before taking them along on a bike ride. But when cycling is as deep a part of the culture as it is in NL, it doesn't surprise me that there are options for young infants.


What I've written here are just some of the basics of what you can find in the Netherlands and I decided to write about it because it is VERY different from the cycling culture in the US, but there's so much I haven't touched on. If you're interested in reading more about bicycling culture in the Netherlands, I recommend reading Bicycle Dutch. The blog has a wonderful combination of history, policy, and current events as it relates to cycling in the Netherlands. Or come and visit and experience it for yourself - either way, you won't be disappointed.

What sort of cultural aspects of your new country would surprise the people back "home"?

A quick post script - The wonderful SJ at Chasing the Donkey had me over for a guest post on her blog. Check it out, and then stick around for some wonderful posts about Croatia!